They just sent me a credit for $19 to use on Amazon Instant Video:

As someone who has purchased digital movies or TV shows in high-definition (HD) from Amazon Instant Video, we wanted to provide you more information about how we deliver HD content. It is our goal to provide you an uninterrupted viewing experience without any video reloading or “buffering.” To provide you uninterrupted viewing we may lower the resolution of HD videos to standard definition during streaming playback. We do this if we detect that your Internet connection to our service may not be fast enough to support HD playback. For more information on viewing HD videos from Amazon Instant Video, please visit our Help page here: http://www.amazon.com/gp/help/customer/display.html?nodeId=200256920

My collection of keyboards, mice and trackballs continues to grow. A recent addition is the  Microsoft Arc Wireless Keyboard.

I’m using this with my second older iMac. That computer sits to the side of the big iMac and runs Windows XP for work purposes. MAWK is and easily connected to the iMac (Microsoft provides software for both Mac and Windows). The keyboard uses Bluetooth to connect to a small dongle plugged into the USS port of the computer. I haven’t tried connecting directly. The keyboard software appears pretty stable and customizable. I’ve not adapted yet for Mac OS X, the iMac is still a little confused regarding the command key. Keyboard action is excellent with responsive with weighted keys.. The board is in an arc and slightly raised in the middle. This would be a great option for someone with a media center computer, either Mac or PC.  I also wish it had illumination.

So, I’m getting the blog back together. This WordPress installation has been rotting on my web server for awhile. I figure it is time to use it. I upgraded to the latest version of WordPress. The back end is really nice. The platform has really grown in the years I have been using it. I’ll blog when I have something to say. I’ll still being taking a look at gadgets and other technology trends. Pop culture, stuff I find on the Interwebz, local topics, movies and music all fair game. Stay tuned.

Part of the reason I am doing this blog is to keep my writing skills updated. Since I left the newspaper business in 2008, my writing skillset has somewhat atrophied. I use simple sentences way too much. Time to step up my game.

By the way, this WordPress theme is called Fusion 3.1 by digitalnature. I will be experimenting with different themes and customization options. 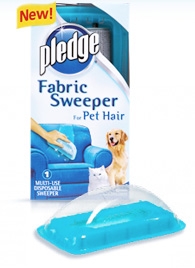 Remind me never to get a white dog with dark micro suede couches.

I’ve been using the Pledge Fabric Sweeper for Pet Hair to keep Ray’s hair off my couches. So far, it rocks. Ray hair can be quite stubborn. I’ve had to run the gizmo over an area several times.

We’ll see if it holds up.

The much maligned AppleTV got a boost with a recent firmware update this week. The software works with the new version of the Remote application for the iPhone and iPod touch. It now uses gestures to manipulate menus. Awesome. Now if it would just get the iTunes visualizer…

My  iPhone case prevents me form plugging the device into the universal docks that hook into speaker and stereo systems. I’ve been pretty bummed that I can’t rock out to Enya at work, even though I have a nice Logitech AudioStation

SendStation has answered my prayers by developing a solution: the iPod dock extender. The gizmo retails for about $30. It comes with a dock, the extender, and a cradle with several rubber pads to secure the iPod or iPhone on the dock. The extender comes in black and white.

The black version of the dock extender fit like a glove on my speaker set, so now I am rocking the workplace once again.

The girlfriend has now decided to get a bigger television screen. Her 47-inch LCD will be bigger than my 42-inch plasma.

Plasma televisions seem to be going the way of the dodo bird. Pioneer recently shut down production. Many experts and AV geeks consider plasma to be a superior technology for display of movies and games. Colors are brighter and blacks are deeper. Viewing angles are also better.

Concerns about burn-in, reliability and power consumption have kept consumers away from plasma. Today’s modern plasma TVs have worked through those challenges for the most part, but LCD still gains ground. 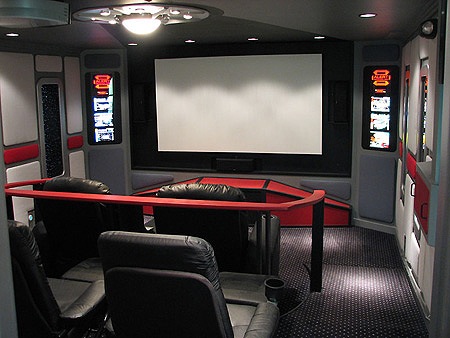 I would like to turn it into a Star Trek-themed home theater setup.

Apparently, sci-fi man caves are the rage. I need to research this trend some more.

The other parts of the basement will be an Apple Store and Best Buy, of course.

The past month I’ve spent time organizing my garage with Rubbermaid Roughneck Totes and peg board. It’s looking pretty spiffy…for me.

Roughneck Totes are pricey at about $7 a pop, but well worth keeping those action figures and comic books safe from moisture. They can easily be stacked to save space.

The original Star Trek series used simple boxes with prismatic wrapping paper to depict 23rd century totes. The series was also fond of cylinders. The photo at left shows a supply container bound for Tantalus colony. Eventually, storage and cargo containers got more sophisticated in the Next Generation and later series.

Space: 1999 used octagonal totes (aka moonbase containers) which seemed to be made out of wood, had colorful markings, and built-in handles. Characters were always falling into them during fights and crashes. At left is a representation of the containers. It’s a icon from Dave Brasgalla’s wonderful collection at The Icon Factory. Kind of clunky and not very efficient when stacked.

Other odd shape containers have appeared in science fiction. The bigger cousins of the moonbase containers appeared in the dystopia film Silent Running. I remember Bruce Dern wrecking into them in one scene:

My containers are smaller and against the garage wall. I hope not to wreck into them.