Last week I had the rare opportunity to view director Stanley Kubrick’s classic space film in 70mm at the Indiana State Museum’s IMAX theater. The screening was part of IndyFilmFest’s Roving Cinema series. The film played to an at-capacity crowd of mostly film buffs and college students.

Yes, it was an intellectual nerd fest.

Most movie theaters today screen films in digital format, even the IMAX theaters. That technology continues to mature, especially with colors and brightness. Analog film and projectors still offer superior image quality, but the technology is expensive and rapidly being replaced.

This print was not a true IMAX-optimized film, just 70mm. Still, the image was 70 feet wide. The film did have some artifacts such as grain and scratches and a few slight audio pops, but overall it was in good shape and played well on the IMAX’s six-story screen.

Director Kubrick was known for his attention to details, and this was clear in the 70mm version. The space station docking and lunar shuttle sequences were especially stunning. With 70mm, it was easier to see the people in the windows of the station and the moon base. Set detail — especially warning labels and company logos — were also more obvious. It was a good display of Kubrick’s world-building skills. One could even read the instructions for the zero gravity toilet on the lunar shuttle.

And seeing the monolith on a six-story screen was pretty intimidating, too.

For me, the greatest strength of 2001 is the craftsmanship. I found the plot thin and slow, but I realize Kubrick wanted to make space travel seem boring and monotonous. I’ve got several books about the film’s making, including the latest from Piers Bizony.

The film – and its under-appreciated sequel 2010: The Year We Make Contact — are among my top favorite movies. A small monolith and moon bus model sits atop my DVD collection.

The Indianapolis State Museum IMAX is one of my favorite IMAX theaters. Comfortable seats and often less crowded, there’s little comparison to the “IMAX light” digital theaters in Indianapolis suburbs. Indy IMAX uses the original analog IMAX projectors. The theater is 20 years old. As of Jan. 25, the theater was undergoing renovations to add digital equipment for more screenings of modern films (press release).

Vehicles manufactured after 1996 have an OBD-II (on-board diagnostic) port. Wikipedia has a great explanation about the connector. The port, usually found near the steering wheel, is used by mechanics to diagnose car trouble. In addition to troubleshooting, many consumers use the OBD-II port to tune their vehicle’s performance and keep track of teenage drivers.

I’ve been using a OBD-II gizmo called Automatic ($99) for more than a year.  The device plugs into the OBD-II port and pairs via bluetooth to a smartphone. A companion app collects trip data from the vehicle, including location, distance, mileage, time. It’s like a black box for the car. This data is displayed on a map in the app and an online dashboard. One nice feature about Automatic is that it determines the dollar cost and efficiency of each trip. It’s pretty spot on, too. My previous car — a Sonata Hybrid — was always scoring high. My current Hyundai Tucson scores well, but not as as good as the hybrid.

Here’s an demo example of how data is displayed:

END_OF_DOCUMENT_TOKEN_TO_BE_REPLACED

Employers are pushing fitness plans to lower insurance costs. Mine is no exception. Last year, I was invited to “invest in my health” by implementing a plan with a website that set health goals and recorded fitness activity.

I did so, and received an $1,000 discount off my family health insurance policy for achieving my goals.

This year, I’ve had to learn a new system. It has been a frustrating experience.

The trend in the health industry is to “gamify” fitness. That’s a good method to get people motivated, but this means implementation of arbitrary rules. Game theorists (i.e. a four-year old child) will tell you that arbitrary rules can be negative reinforcement to game participation.

This is what I am currently experiencing with this year’s effort.

Example: One goal is to “gradually lose weight.” I have lost 19 pounds. The standard for awarding points for the goal (set by the website) was to lose 20 pounds by a specific date. Unfortunately, nineteen pounds wasn’t good enough. There is no partial credit. There are no points awarded for the attempt. Once goals are set, they cannot be adjusted.

To truly be a fair game, the system should have awarded 95 percent of the total point value for the goal. 

END_OF_DOCUMENT_TOKEN_TO_BE_REPLACED

Universal Studios originally planned Buck Rogers in the 25th Century as a series of TV movies. After the Battlestar Galactica TV pilot became a hit movie overseas, the studio chose to launch Buck into space with a theatrical version. The movie was successful and made about $21 million in North America, according to Wikipedia. Networks took notice, and soon Buck Rogers made the jump to a weekly TV series on NBC.

To start the series off, the studio fleshed out the theatrical  version into a two-part pilot episode, Awakening. The differences are minor, however, and the same themes are woven throughout both stories.

END_OF_DOCUMENT_TOKEN_TO_BE_REPLACED

The year is 1987, and NASA launches the last of America’s deep space probes. In a freak mishap, Ranger 3 and its pilot, Captain William “Buck” Rogers, are blown out of their trajectory into an orbit which freezes his life support systems, and returns Buck Rogers to Earth, 500 years later.

Buck Rogers In The 25th Century is a favorite TV series of my childhood. The show, starring Gil Gerard and Erin Gray, lasted two seasons from 1979-1981.

Fortunately, the series is on DVD. I snagged the complete series a few years ago. Universal has recently released each season separately. Even if you have the original box set, Buck fans may want to buy the second season for a special Easter Egg. More on that in another blog post later.

END_OF_DOCUMENT_TOKEN_TO_BE_REPLACED 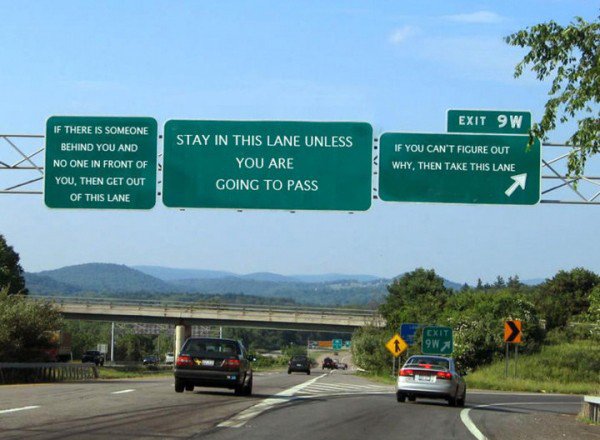 Indiana legislators passed a law this year to allow the police to ticket drivers for camping out in the left lane.

Drive anywhere in this state and you will soon realize such a law is needed. Many have forgotten about “slower traffic keep right.” It’s a law that’s been on the books for years and covered in the state driver’s manual. Here’s Indiana Code 9-21-8-2(b).

END_OF_DOCUMENT_TOKEN_TO_BE_REPLACED 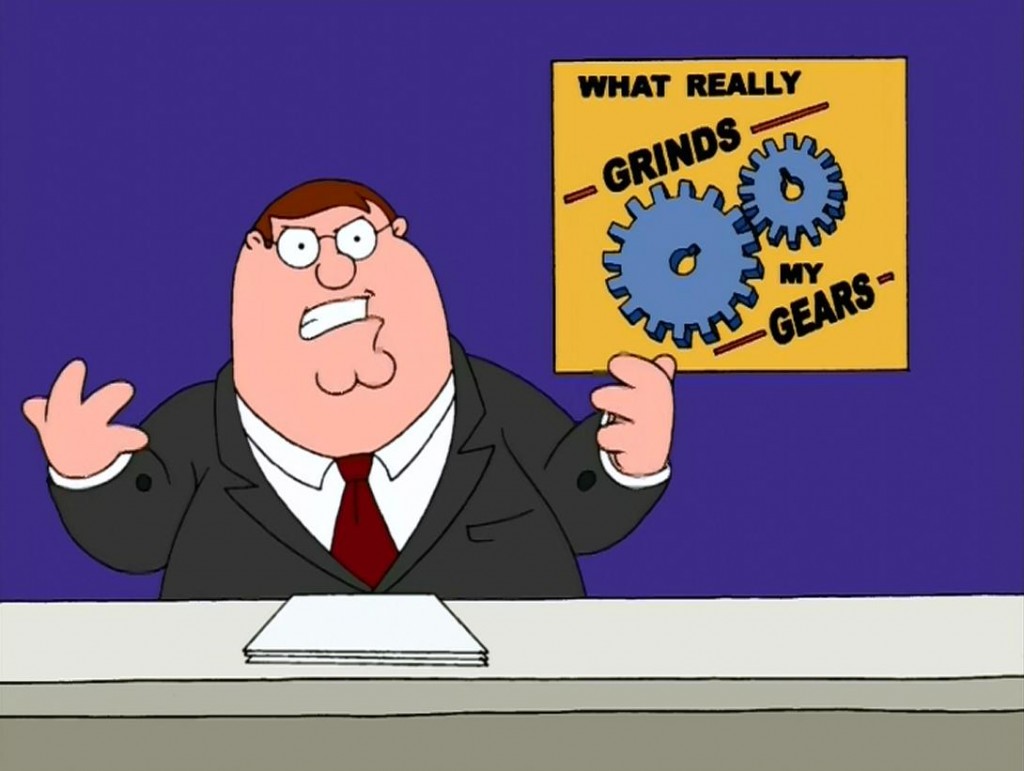 From the Grind My Gears file:

Today’s lunch will live in infamy. I call it the pizza chase. We attempted to order a pizza from a local chain using their online service. When I arrived, I was told they didn’t have our order (and that required a lengthy wait) and they sent me away. I returned to the car, had my wife forward the e-mail confirmation to my smartphone, and showed it employee. She said she hadn’t receive the order yet because it was scheduled for 12:45 p.m. The order was place at 11:30 and I was at the pizza place around Noon.

“What we have here is a failure of communication,” I thought to myself.

END_OF_DOCUMENT_TOKEN_TO_BE_REPLACED

I’ve often thought about running for office. I like public service, but not politics. I still believe government can have a positive impact on our lives. I’ve written to my legislators about the following ideas:

If you find validity in these ideas, I encourage you to make your voice heard to your legislators and governments.

Many are excited for the test launch of the Orion spacecraft this December.  More than 3,000 people applied to be NASA guests at the Kennedy Space Center as a part of the Orion NASA Social. I wasn’t selected, but I congratulate those that were and will follow their experiences on social media.

UPDATE: Registration is now closed. Good luck to all that applied!

NASA hosts these meetings of social media users this in order to further communicate with the public. It’s an unique solution of bypassing a jaded professional media that doesn’t cover space issues.

I’ve been fortunate enough to witness two rocket launches as a part of a NASA social: the Juno Jupiter space probe from Cape Canaveral and the replacement Landsat from Vandenberg Air Force Base. The launches were amazing.

Living in the midwest, it can be tough to make arrangements to see a rocket launch. For this reason, and because I have already observed two launches, I don’t apply to many of the launch-based NASA socials.

NASA is a big organization and has different missions at its nation-wide centers (listing), ranging from life sciences to aeronautic research. Like my headline mentions, NASA does more than just launch rockets from Florida.

My visits to the centers have been phenomenal. I enjoyed getting a behind the scenes look at the labs, workshops and training facilities. My two favorites have been the Goldstone Deep Space Network Complex, and the Dryden (now Armstrong) Flight Research Center. The Great Moonbuggy Race at the U.S. Space and Rocket Center was a blast, too. In all cases, I enjoyed talking with the staff, scientists, and seeing demonstrations and technology up close. None of them had rocket launches on the schedule.

Some are of the opinion that once you attend an NASA social event, you should not apply again in order to increase the odds that others will be selected. I understand the sentiment. I add that if you have only witnessed a rocket launch and consider yourself done, you may be missing a bigger picture.

Keep in mind that an application doesn’t mean you will be selected. I’m pretty sure NASA attempts to diversify its audience reach, and they should. Sure, I’ve been disappointed at times but never upset or … gosh forbid … angry. I realize I am not entitled a spot and I’m always honored when selected.

Bottom line, I know that if I am not attending, I’m delighted that someone else is learning about NASA wonders.  You could be that person. For future NASA socials, keep a eye on the web page or follow along on Twitter at twitter.com/nasasocial. 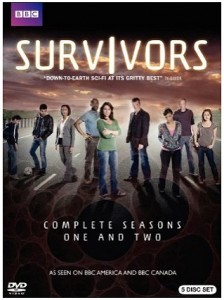 If you are looking for something to binge watch on Netflix, I recommend Survivors, a 2008 BBC TV series. Both Seasons 1 and 2 are available and short enough to conquer on a wintry weekend. Also available on DVD.

The series is about survivors of a flu pandemic which kills most of the world’s population. At times the show can be rather soap-ish, but more often it explores deeper issues such as security versus freedom, reliance on technology, and how people make connections and form societies after an apocalyptic event.  No zombies here, though, most everyone just catches the “European Flu” and dies rather quickly.

The 2008 series is actually a remake of a 1975-77 BBC series written by Terry Nation, of Doctor Who and Daleks fame. The original series (and Nation’s book that followed) was bleak but fondly remembered. For the 2008 series, head writer Adrian Hodges updated the original with a more diversified cast and included topical issues such as disease outbreaks and increasing reliance on technology. Unlike The Walking Dead, the lead character in Survivors is a mother looking for her son. I found all the characters to be well fleshed-out. There is a low gore factor.

The first episode, at 90 minutes, drags on a bit, but stick with it. Season Two is a winner. Unfortunately, it ends with some unanswered questions. There was no season three. BBC canceled the series because of low ratings. Even so, a worthy watch. There is enough closure to justify the time.

For some time, the series was one of the most popular on Netflix. There were discussions about Netflix producing a continuation, but nothing has materialized so far. Instead, we are treated a new audio series from Big Finish Audio. Set in the same era at the 1975 series, it features some new characters dealing with the same apocalypse. I’m on the first CD. I’m disappointed  that it is not set during the 2008  series, for it would seem more relevant.