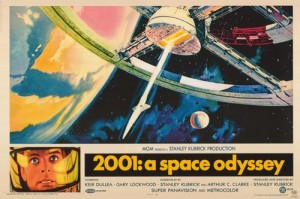 Last week I had the rare opportunity to view director Stanley Kubrick’s classic space film in 70mm at the Indiana State Museum’s IMAX theater. The screening was part of IndyFilmFest’s Roving Cinema series. The film played to an at-capacity crowd of mostly film buffs and college students.

Yes, it was an intellectual nerd fest.

Most movie theaters today screen films in digital format, even the IMAX theaters. That technology continues to mature, especially with colors and brightness. Analog film and projectors still offer superior image quality, but the technology is expensive and rapidly being replaced.

This print was not a true IMAX-optimized film, just 70mm. Still, the image was 70 feet wide. The film did have some artifacts such as grain and scratches and a few slight audio pops, but overall it was in good shape and played well on the IMAX’s six-story screen.

Director Kubrick was known for his attention to details, and this was clear in the 70mm version. The space station docking and lunar shuttle sequences were especially stunning. With 70mm, it was easier to see the people in the windows of the station and the moon base. Set detail — especially warning labels and company logos — were also more obvious. It was a good display of Kubrick’s world-building skills. One could even read the instructions for the zero gravity toilet on the lunar shuttle.

And seeing the monolith on a six-story screen was pretty intimidating, too.

For me, the greatest strength of 2001 is the craftsmanship. I found the plot thin and slow, but I realize Kubrick wanted to make space travel seem boring and monotonous. I’ve got several books about the film’s making, including the latest from Piers Bizony.

The film – and its under-appreciated sequel 2010: The Year We Make Contact — are among my top favorite movies. A small monolith and moon bus model sits atop my DVD collection.

The Indianapolis State Museum IMAX is one of my favorite IMAX theaters. Comfortable seats and often less crowded, there’s little comparison to the “IMAX light” digital theaters in Indianapolis suburbs. Indy IMAX uses the original analog IMAX projectors. The theater is 20 years old. As of Jan. 25, the theater was undergoing renovations to add digital equipment for more screenings of modern films (press release).